Life Changes As We Know it in #NoCOCRE

Private owners have been net sellers so far this year. They have sold almost $200 million more than they have bought as a class of property owner. Either it was a sign of locking in gains, or exiting while the market still had demand and market priced buyer 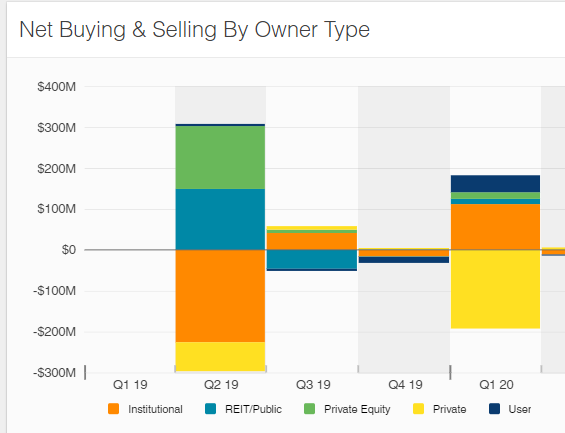 Covering the commercial real estate transaction world in the tri-county region of Larimer, Weld, and Boulder counties, one must pause to remember that the economic impact has been sudden and not yet all showing up in statistics. Transactions dropped considerably as the situation and shelter-in-place world became a reality. Our
Wtri-county area only transacted 43 deals in March. Those deals totalled $76 million, which is less than half of what our typical rate has been. No major apartment deal occurred, as investors likely fear the risk of tenants not paying rents. Reportedly about 30% of tenants across the nation are behind on residential apartment rents, with many thinking May will be much higher.

Certainly some deals did close, and were likely in the pipeline prior to the wide spread awareness of what would occur in the economy.
Crescent Real Estate equity fund acquired another property in the Flatiron Business Park in Boulder. They are rounding off their major holdings in that office park. They bought an approximate 60,000 SF building, which was 87% occupied, for $271 PSF, and a total sales price of $16.3 million.

The Boulder City Building, a mixed use property now anchored by Japango Sushi Restaurant on the downtown Pearl Street mall in Boulder, sold to the owners of the restaurant for $623 PSF, and a total price of $9.3 million. The tenant (now owner) of the landmark property bought the 15,000 SF building after occupying it for some time.

The Hampton Inn in Fort Collins sold, for $5.6 million. This 75 unit property sold at auction to a local hospitality group. Total price calculated to less than $75,000 per room, which is below replacement cost. The hospitality industry is in economic distress as business and recreational travel has come to a halt across the nation.

Journey Homes, one of the leading homebuilders in the region, bought a 17.4 acre land site for $4.4 million, or $5.80 PSF. Seller was McWhinney Companies, a major developer in the region. The parcel is located in Loveland. Most projections are that the demand for housing will continue in the region as demand is higher than supply. The area still is a top growth region based on population, for the state of CO, albeit at a slower rate than the past decade.

A private investor bought a 12,000 SF higher class office property in the Crossroads region of Loveland. This sale was reportedly at a 6.6% cap rate, and calculated to $338 PSF. The tenants include a homebuilder, a financial services firm, and an insurance agency. It is seen as having a stable occupancy due to the strength of the tenants and their business base. Total price was about $4.05 million. The buyers had sold vacant land recently and used an IRS 1031 exchange to purchase the income producing property. Thus, they now have cash flow from their purchase as part of that exchange, as the raw land was non-income producing.

Governmental entities occasionally purchase commercial real estate. The High Plains Library District purchased a 41,000 light industrial property in Greeley for $4 million, at $98 PSF. One of the attractions to the buyer was the abundance of parking available at the building. 100 spaces for parking will allow them to provide library services at this building in the future.

Since veterinary services may still be considered “essential services”, it was no surprise to see a Fort Collins property on Lemay ave. selling to a veterinarian. Fort Collins Veterinary Investment bought the 7600 SF facility for $2.7 million and plans to run their services including kenneling at the property. Price per square foot calculated to $355.